If you’ve read previous articles about Ethereum DAPPs (First, Second) – you already have your very own ERC20 compliant token. Today we’ll make ourselves familiar with ERC721.

What Are We Going To Build

I think everyone has already heard about CryptoKitties. A game based on Ethereum blockchain where you collect and breed adorable kittens:

The game has huge success and a lot of kittens are sold for a crazy amount of money, like hundreds of thousands of dollars.
The game is mostly open-source with a few exceptions (breeding and genetic algorithms).

We’ll also do a collectible token but with way simpler logic. Our token won’t be able to breed, only you as an owner will be able to mint new tokens.

You’ll learn how to create non fungible tokens, how to write tests for Ethereum contracts and how to connect them to js front end.

We’ll build a wallet for unique collectibles: gradient tokens. Every token will be represented as a unique CSS gradient and will look somewhat like this:

You will be able to see the list of owned tokens and transfer them between wallets.

In this tutorial I assume that you have basic knowledge about ReactJS and went though my previous tutorials about Ethereum contracts (First, Second)

ERC721 describes non-fungible token. BTW it is also knowns as NFT, which basically means exactly that (Non Fungible Token). Non-fungible means that every token is not equal to any other token. As opposite to ERC20 where all tokens are equal.

Most known example of ERC721 is CryptoKitties, where each kitten is a token described by the ERC721 compliant contract with a bunch of additional functions.

Most known example of ERC20, therefore, is any ICO, as 99% of them are based on ERC20 compliant Ethereum contracts.

Unlike ERC20 you can’t just store amount of tokens in a wallet. Every token is unique so you have to store owner of each token instead.

With NFT you want to know several things:

Also, you want to be able to do some actions like:

This is it, ERC721 provides functions for all of that.

So basically ERC721 describes ownership and requires following functions to be implemented:

Set Up The Truffle Suite

So to build our Gradient Token we’ll use Zeppelin’s ERC721 template and add one additional function to generate random gradient background upon token creation.

Create a new project and initialize truffle there:

Open your truffle.js and add set up the development network:

Just defining the token for now.

We inherited it from two contracts: ERC721Token to make it represent a non-fungible token, and from the Ownable contract.

Ownable allows managing authorization. It assigns ownership to deployer (when the contract is deployed) and adds modifier onlyOwner that allows you to restrict certain methods only to contract owner. Also, you can transfer ownership.

We add the index in the beginning of migrations name so truffle can tract successful migrations and not run them twice.

Run the local ethereum network, I recommend to use ganache:

Truffle uses Mocha as a testing framework, with one additional scope: contract().

contract() is very similar to describe() but it provides some additional features:

Truffle uses Chai as assertion framework, you can check the documentation here

Note that we first require the GradientToken artifact. Which is json representation of your token interface. This is the thing that allows you to interact with your contract from Javascript code.

This test is unnecessary as this functionality is already tested by the Ownable tests in Zeppelin library. I’ve added it only for quick demonstration.

When you deploy contracts your first contract will usually be the deployer. 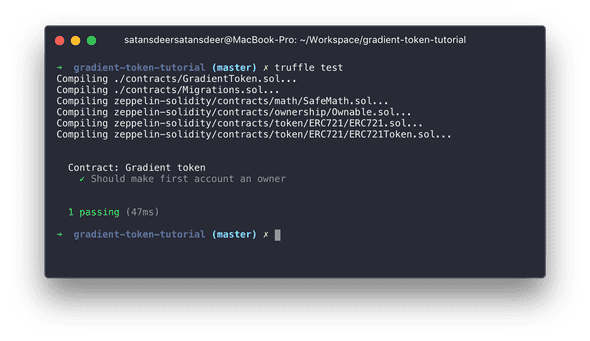 The test should pass.

We want to have a gradient associated with every token. We’ll use circular gradients represented by two colors.

Solidity allows you to define new types of data in form of structs.

Let’s define a struct that will store our gradient representation:

Our Gradient struct contains two string type fields. Structs in solidity can have other structs as fields, but It is not possible for a struct to contain a member of its own type. This restriction is necessary, as the size of the struct has to be finite.

In solidity there are two types of arrays: fixed and dynamic. For fixed arrays you should define their length.

We don’t know yet how many gradients do we want to create, so let’s define dynamic array:

First we define an in memory _gradient variable. In memory means that lifespan of this variable will be limited by the execution scope.

There are 3 ways of storing data in Solidity:

By default stack is being used. There are only two data types you can control kind of storage: ‘Struct’ and Array.

In our case we need this variable only temporarily so we used memory storage.

Then we defined _gradientId by getting new length of the gradients array (the push method returns the new length) minus one, so we start from zero.

Finally we call the _mint method that we got from ERC721Token that we inherit.

This method is internal and it does the following:

Cool, now let’s add a method that will allow us to get gradient data associated with specific token:

This function is also public, also we define it as view basically promising to only VIEW stuff and not modify the state.

We defined temporary memory variable _grad that we got from our gradients array by requested _gradientId.

Then finally we define the return values outer and inner. They will be returned as an array.

At this point your contract should look like this:

This test is simple but it tests two things at once. First we test that we can mint new token with. Then we expect that current account has now that token, and we assert it using that getGradient function that we created before.

Now it’s time to test if only the contract owner can mint new tokens. Add following test to mint block:

Here we used assertRevert to make sure that mint function would throw error. But we forgot to import it.

Add import statement in the beginning of file:

OK, now it won’t run. You can just use import in your tests.

Now as we run our code in node environment you need to install a few packages to be able to use import statement:

Add the following to your .babelrc:

And this to your truffle.js file:

Add it before the module.exports.

Try to run the tests: 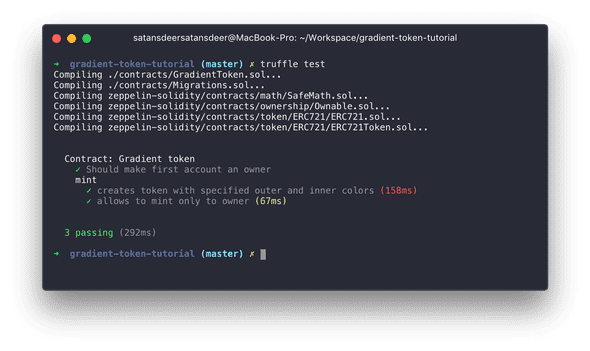 Now it should work.